Slash to Embark on Massive Tour Next Year 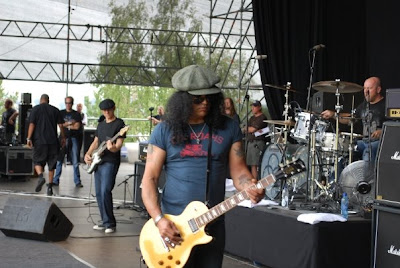 "I don't know how I'm supposed to wait until next year to put out this record! It is so fucking cool & I am so anxious to get it out already. We start mixing soon & that will be that, ready to go. But, I have to wait, there's no way around it, for all kinds of logistic reasons & that's the reality.

But, my VR bandmates & I had a meeting a couple of weeks ago & although the search for a singer will continue, I am going to tour on my solo record most likely thru next summer starting in March or April. We (VR) will keep the word of mouth system going & listening to submissions from singers & checking out different singer's sites etc, we know the right guy is out there somewhere. It's possible somebody could turn up before I do my tour & we could start working on new material sooner than later, in a perfect world.

As far as my tour is concerned, I have already started to put together ideas for a kickass band & the plan is to perform some new stuff, Snakepit, VR & Guns stuff. The new album is really great & deserves that I should support it. Plus, I'm really looking forward to getting out there & doing some gigs, its been more than a year since I was on a proper tour & all these one off jams are basically just a tease.

So, there's the update for now, I'm still tinkering away on the solo record but there really isn't much left to do on it but mix it, which starts in September."
posted 2:34 PM