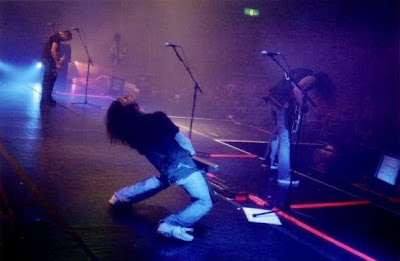 I've copied a brief excerpt of the Q&A below.

GnREvolution: I would like to ask if your solos on "Shacklers" and "Riad" were influenced at all by Buckethead and did you secretly try to out do him?

Bumblefoot: Hahaha, no and no. Listen to my demos from 20 years ago and you'll find that I play the way I play, long before there were buckets on anyone's head or bumbles on anyone's feet. Guys from the same era like me, Bucket, Mattias Eklundh, Christophe Godin, Guthrie Govan, and plenty more, all have a similar thread in the spirit of what we do.

No one's copying each other, the same way most 70's blues rock guitarists aren't copying each other - but there was something in the air at the time their cast was solidifying, that affected how they expressed themselves. This happens throughout every era of music, and in our case, the transition from the fun gluttonous 80s into the tighten-your-belt 90s, a time when cultures began to merge, big hair rock turned toward funk rock, grunge, rap rock ... there was an open-mindedness, more of a multi-mindedness that occurred. Listen to any of our solo albums, you'll hear what I mean.

GnREvolution: Are there any songs on Chinese Democracy that nearly didn't make it? What can you tell us about the alternate album artwork and CD booklet?

Bumblefoot: Ah man, I never get into things that haven't happened - it can affect the final outcome of things, ya can't do that. It's like going up to a stranger and saying, "In 10 seconds I'm gonna try to steal your car." Guaranteed, the outcome won't be the same. So I never talk about plans, things that haven't happened yet - also, as I'm here typing this, managers could be walking out of a meeting in LA, and I don't know what's up until they tell me. Anything I'd say would be mis-information until it's so absolutely undeniably definite, in which case you'd probably find out from them soon after I did.

In my own band, there's less riding on things, it's OK to open the window and let everyone see inside. And I enjoy that, making videos in the studio as an album's being recorded, letting people know what I'm planning for myself - no biggie, if the plans don't happen, it's not like multi-million dollar companies have invested time and the work of hundreds of people are affected by the change. There's a need for protection and privacy when it comes to GN'R biz, or anything on that level. I know it can make you feel frustrated, invisible, abandoned - even though it sucks, I hope you understand that there's too much at stake to risk being irresponsible with information.

GnREvolution: Do you have anything to say about the chemistry of the members of Guns N' Roses, either person to person, or as a whole group? And what the hell happened with Robin, it's so weird he left on the eve of the album release?

Bumblefoot: I can't and won't speak on Robin's behalf, it's totally up to him if he wants to share anything about it. Me, I'm in touch almost daily with members of the band and crew, we hang when we can. I see Frank most often because we live near each other on the East Coast. But we all have phones, email, we're in touch pretty often.

GnREvolution: Did you work on any of these tracks which Axl confirmed as working titles of future GN'R Material or was your involvement in the recording process strictly limited to the songs which appear on Chinese Democracy? (Ides Of March, Berlin (Oklahoma), Atlas Shrugged, Oh My God, Silkworms, Down By The Ocean, Soul Monster (Leave Me Alone), Seven, The General, Thyme, Quick Song, Zodiac).

Did you contribute to writing any new material for GN'R that we won't hear until some possible future album? Is the material you've heard for the follow up albums heavier or is it pretty much the same ballad to rocker ratio as appears on CD? Basically anything you can tell us about any future GN'R material would be appreciated...

Bumblefoot: I played on a good handful of songs that weren't on Chinese Democracy. [I] can't predict what the fate of any of those songs will be. I haven't written any new songs with GN'R, [but I] would like to see it get to that point.

(This is but a short excerpt, you can read the full interview here.)
posted 11:47 AM

where can i hear these songs?

«There's a need for protection and privacy when it comes to GNR bizz, or anything on that level. I know it can make you feel frustrated, invisible, abandoned - even though it sucks, I hope you understand that there's too much at stake to risk being irresponsible with information.»

For me, that's the most important statement from the interview. They know they're acting like crap, but this time it's not on Axl's mood swings, I guess. They don't tour because it's all a mess bizz and legally wise.

Nevertheless, it is sad. SAD, that such artists, that have such outputs as some songs we see in Chinese Democracy, can't perform because of corporate issues. SAD.

'Ides Of March,' 'Berlin,' 'Atlas Shrugged,' 'Down By The Ocean,' 'Soul Monster,' 'Seven,' 'Thyme,' 'Quick Song,' and 'Zodiac' have not leaked into general circulation.

I guess we'll just have to wait for the next album to hear them, unless they leak before that.

15 seconds of 'The General' has leaked. That's all we've got of that one.

thanx mack!
i have "oh my god" long ago, my bad. even got some bits on silkworms, i'm guessing buckethead's messing around with distortion.