Live from the Jungle is an EP by Guns N' Roses that was only released in Japan. Tracks one, four and five were recorded live at London's Marquee Club on June 28, 1987.

This EP is referred to as Live from the Jungle even though the similarly titled song "Welcome to the Jungle" does not appear on the EP. It is named so because part of the large red text on the album's obi strip reads "raibu furomu za janguru", meaning "live from the jungle". 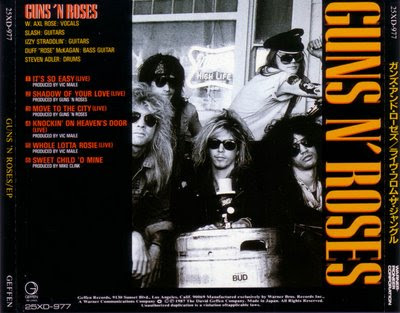 thanx mack! i didn't have this one!
ard

Wow, I use to own list back in the late 80's. I ordered it out of a magazine ad. This album has the best version of Knockin on Heavens Door by GnR that I ever heard. Thank you