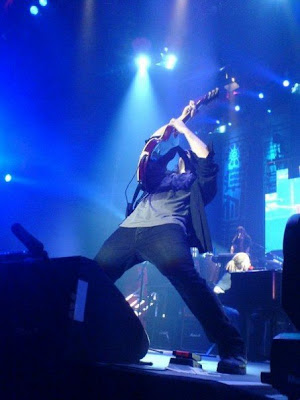 What are your memories of Australia on the Guns N' Roses tour?

I think we landed in Sydney then shot all the way over to Perth. Then we drove up to Fremantle and visited Bon Scott’s grave, paid our respects. Just the little things you remember. I remember being on a train and there was a young girl who had part of her face painted – she was going to a football game and the way it looked was something different to what you see in America. She had a little flag painted under her eye. It’s the little things like that. I remember those things more than the shows. Just the normal, human moments. Those are the things that really stand out.

Y’know, the view from the hotel in Sydney overlooking the Opera House and the bridge and everything. Walking around with my wife, Sebastian Bach and a couple of guys from his band, and suddenly some guy in a trenchcoat comes running up to us going “Hey! Hey! Hey!” and he opens his coat up and pulls out Axl’s microphone. It turns out that the night before, when Axl through his microphone out, that’s the guy that caught it. Oh what else ... I remember also in Sydney eating in a really nice restaurant along the water at night… just the nice moments like that.

The shows are always ... how do you even describe a show? It starts and your brain is in this other mode, and next thing you know the show is over and it’s more like one of those hazish dreams: “Did I just play, or didn’t I?” So unless something very significant happens in the show, I don’t really remember the show in a very clear way. But it’s everything after.

Going back afterwards and meeting Chris Szkup and his girl, hanging with them. I can still picture seeing them and this nice drawing they gave me in a frame, which is hanging in my living room right now. It’s hanging over my wife’s head as she’s sitting on the couch right now watching Hell’s Kitchen on TiVo. So it’s little things like that. No matter what happens, good or bad, those are the fond memories that make it an endearing experience you cherish. The dinners, the hanging out.

Are there any plans for more GN'R touring?

There have been a lot of plans, it’s just that when it comes to battling the economy ... there are so many variables that could make it not work. I’m guessing at this point that if something is confirmed, management would let everyone know. So at this point if I said anything it would be premature, so I should just wait for them to say anything.

(As usual, this is just a short snippet. You can read the full interview here.)
posted 12:35 PM