Duff Rocks on the Range with Alice in Chains 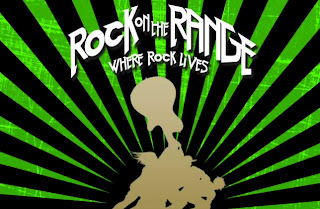 Rolling Stone
Hard rock ruled the heartland this weekend as Mötley Crüe, Slipknot and Alice in Chains headlined Rock on the Range. For its third year, the Columbus festival drew 38 bands and sold a two-day total of 56,000 tickets, according to L.A.-based promoter Del Williams. A mixed crowd — college kids in baseball caps to bikers — partied under dreary skies on Saturday, and were energized and ready to toss the devil horns on sunny Sunday.

On day one, before he joined Alice in Chains for a haunting rendition of “Rooster,” Velvet Revolver’s Duff McKagan played a side stage, fronting his band Loaded. “The thing about Rock on the Range, I didn’t understand it until Velvet Revolver played here a couple years ago,” explained Duff backstage between appearances. “It’s in Columbus, a little college town — how big a festival can you have here? But people come here from Cleveland, Detroit, Toledo, Cincinnati, Indiana, West Virginia, from Kentucky, Tennessee. They all converge, and this is the big thing of the summer.”

Alice in Chains returned in full force with new co-vocalist William DuVall (formerly of Comes With the Fall), opening the set with the murky anguish of “Rain When I Die.” Singer-guitarist Jerry Cantrell led the reconstituted Seattle quartet, who bulldozed through choice cuts like “Dam That River,” “Again” and “Man in the Box.” By the mesmerizing set-closer “Would?” the crowd was roaring approval. DuVall isn’t a clone of deceased singer Layne Staley, and though he didn’t hit the notes in quite the same way, he hit them all the right way.

The set was one of just two American summer shows before the band unveils a new album. Slated for September release, the as-yet-untitled disc has a strong buzz. After his set, McKagan called it “the best rock record he’s heard in the last 15 years.” Cantrell — who had nearly twice as many writing credits as the late, great Staley on previous albums — said the record represents the entire AIC spectrum from electric dynamics to unplugged angst. Though the group’s set didn’t feature any new material, DuVall hinted at a subtle new lyrical direction.

“I think there’s always been a little bit of death trip element [and a] survivor element,” said DuVall. “I think maybe the percentage has been a bit inverted [on the new album]. Where some of the records might have been more Scarface, this one is more Shawshank Redemption.”

Alice in Chains sounded nice from my window last night.

i am soooo fucking psyched about that record man... i can't wait