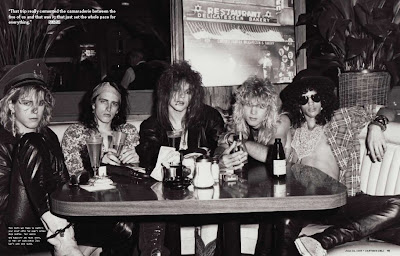 In the latest issue of Classic Rock magazine, Duff McKagan spills the beans on Chinese Democracy, writing for Playboy and the continued hunt for a VR singer.

Here's what he had to say about his former bandmates.

What did you think of Chinese Democracy?

I was glad to hear Axl's voice. I've always been a fan of his voice. He's one of the real ones. I'm in sort of a different position listening to that record, because I'm not listening to it for it to sound like anything I was part of, because I know it's not that. I think Axl sang his ass off. He made the record he wanted to make and I'm happy for him. I thought he did a great job

Do you think there will be a point where the five of you will be friends again, able to just sit down and talk about the old days?

Wouldn't that be great? I think Guns were five dudes with this shared vision. We met and it was the exact right five guys. I'd been in enough bands before to know that there's always a weak link in a band. The moment we got in a room and played the first three chords, we all knew it. We didn't have any illusions that we were going to be huge or anything. But people started coming to our gigs and then labels started coming to our gigs and we made the record we wanted to make. And all of a sudden it hit, and it seemed like a whole generation of the world had an affinity for that record.

We went through some growing pains together. Everybody knew who we were. Man, you'd go to the grocery store and people would be like: "Whoa! Dude!" How do you cope with that? All we had was each other to help us understand. We all survived. And that's pretty amazing, that we're all alive to talk about it.

So yeah, as part of a perfect world we could all go out to dinner without our wives or anything and say, "Congratulations. We're all alive, and people still freak out over what we did." Will that happen? I don't know. It's probably utopian.

Thanks to: Jordan Rose