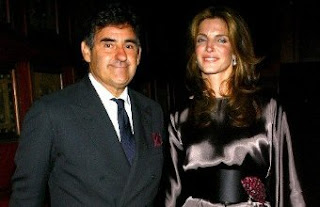 Gawker
Peter Brant seems to be going through the billionaire's version of mid-life crisis.

It's been brutal on his second, and soon to be ex-, wife.

Instead of acquiring a new car, like your typical older man reckoning with uncomfortable feelings, Brant bought a $50 million private jet. Instead of quitting his job, he shook up his pet magazine, Interview. And instead of your typical marriage problems, he's going with the nuclear divorce option, his wife's "friend" tells Page Six:

"I'm sleeping in the maid's quarters," Seymour told a friend... "He's playing very dirty with me."

...A friend said she has come home to discover the locks had been changed.

Of course, Brant has already been through a family shakeup once before — when he left his first wife, with whom he had five children, for fashion model Seymour, whose past relationships included one to the then-married head of Elite Model Management and one with Axl Rose of Guns N' Roses.

It could, perhaps, be worse: Some moguls assert their virility by buying severely overpriced newspapers for billions of dollars. Brant sells those newspapers the stock they print on — a superior economic position in a recession. In the midst of a messy divorce, however, Brant must be wishing he was the one with control over the tabloids.