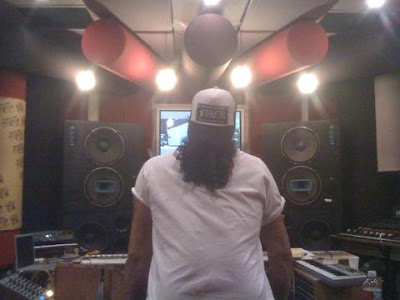 Hey all, how's it going? I've been really busy with recording etc, I haven't been keeping in touch.

Outside of working on the record things have been quiet. No VR updates as of this writing, but I'm anxious to see something happen with an amazing frontman for the band in the not too distant future, whoever that might be.

My gig at the Quart Fest is coming up in Norway, June 30th. Which, is starting to come together. I'll post who all's playing next week, but it's a great line-up & the songs so far are shaping up to be a really great set.

As far as the record goes, we're almost done with vocals, 2 more songs left & a couple odds & ends. Then, I can stand back & see what we've got. It is a fucking awesome ensemble, that much I do know, with brilliant performances from each & every singer. I do hope to have a release date soon, but I can assure you, as I said before, it won't be this year. It will, most definitely, be out be very early in the new year. Even though the recording process is almost done, the legal logistics involved with so many different artists takes a minute to iron out.

When the record is released I plan on posting what gear was used on what songs; guitars, amps etc. Although, most of it was done with one guitar & 2 amps. A lot of interesting mike set-ups though. The record is being recorded anolog as well, this might be one of the last rock & roll records to be recorded that way, no joke. So, of course, I have to release it on vinyl, as well as cd.

Right then, I guess that's it. I'll have the Quart Fest line-up for you guys next week & anything else that comes up as well, have a good one.

There you are. I thought you died.