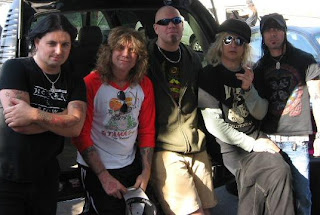 About to embark on a World Tour with his band Adler’s Appetite, legendary Guns N’ Roses drummer Steven Adler rocked the Opium Garden Nightclub at the Hard Rock Casino in Hollywood, FL.

Traveling with bandmate Chip Z’Nuff, Steven flew into South Florida for a special engagement that won’t soon be forgotten by those in attendance. Playing along to a series of modern dance hits and rock classics, Adler enthralled club goers with his drumming prowess. Looking healthy, trim, and fit, and drumming better than ever, Steven thundered through a nonstop 45+ minute set with DJ Rush.

Sporting his ever-present smile that lit up the room along with the flashbulbs of adoring fans, Steven worked the club into a frenzy with his trademark high-octane fills and sonically enormous grooves. As Chip Z’Nuff commented, "Steven is the conductor that shovels coal into the Rock and Roll Choo-Choo Train!" After the set, Steven and Chip took time to greet every fan, sign autographs, take photos, and embrace hundreds of beautiful and loving ladies in attendance.

This clip shows the night’s finale, with Steven drumming along to "Sweet Child O’Mine." The energy inside the dancehall is incendiary as Steven, live on his drum kit, shows us all what making beats is really about.

Watch for the movie Sugar Boxx in which Chip and Steven have 2 songs featured off their project Johnnie Rotten Jr. Rumor has it that Guns N’ Roses founders Slash and Steven will be recording together in 2009. We are all hoping these 2 friends reunite for the first time since Appetite for Destruction dropped from the rock and roll Heavens. Steven Adler is back and ready to champion on with his rock career, second to none.

Words and video by Johnny Heslin

i believe steven believes he'll play with slash. I don't believe is that the latter is very much up to it. But keep on dreaming, popcorn!
ard