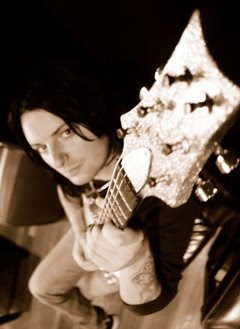 In a brand-new interview with Icon vs. Icon, South Windsor, Connecticut-born rock-guitarist Alex Grossi talks about his stint with Adler's Appetite and his work on Dizzy Reed's solo album with producer Del James. 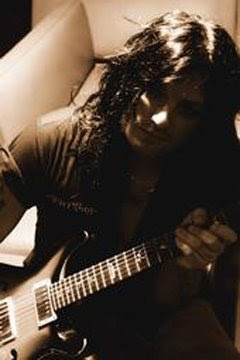 For those how might not know, how did you get involved with Steven Adler and Adler’s Appetite?

I have been working with Steven on and off for about five years now. I initially got contacted by Kevin DuBrow of Quiet Riot, to do some solo show before Quiet Riot reformed in 2004, that turned into the Bad Boys of Metal tour. It was a summer package that featured Joe Lesté of Bang Tango, Jani Lane of Warrant, Steven Adler of Guns N’ Roses and Kevin DuBrow, with me playing guitar for all four bands. I was literally on stage for four hours a night. During that time, Steven and I became really good friends and after the tour we kept in touch. I did some solo shows with him and after his stint on Celebrity Rehab with Dr. Drew, he decided to reform the band and called me. The rest is history!

Adler’s Appetite parted ways with one singer and now you have brought Rick Stitch in to handle the vocals. What does Rick bring to the table?

It is really, really difficult when you are trying to emulate something that people are so familiar with. Appetite for Destruction sold well over 30 million copies worldwide and people know every note from that album. We just played over in Argentina. They don’t speak English but they can even sing the guitar solos! So, we needed someone who can be true to the music but we also don’t want to be a tribute band. The drummer in this band, Steven, wrote a fifth of the music playing on that album. When we made the singer change, a lot of people would contact me or Steven through Myspace. They were wearing the bandanna and one even went so far as to have the fake Axl Rose tattoos put on. That wasn’t what we wanted. We wanted a guy who can hit the notes and do the stuff but at the same time is not a clone. We’re not Steel Dragon, ya know! [laughs] Rick has been great. It is nice to have a guy who is on the same page off stage as he is on stage. What people don’t realize about a touring band that works as hard as we do is that you have to live with these people twenty four hours a day. You may have two straight days off in the middle of God knows where or Iowa and you have to be friends. Certain people get along, certain people don’t but that is the nature of the beast. Instead of being married to one person, try being married to five or six! That’s basically what it is like.

You mentioned recording guitars for Dizzy Reed’s solo debut and I know Del James is serving as producer on that release. What can you tell us about this project and any idea on when it may hit stores?

I have no idea about it’s release date. I know that they are mixing it right now. Once Chinese Democracy came out, I am sure it took a little bit of a back burner. Working with Del was great. For a guy who doesn’t really play an instrument he has a really great ear. He will walk into the room and say “No, no! Do it more like…” and then throw out some crazy analogy that ends up making perfect sense at the end of the day! It was really great working with those guys. As a Guns N’ Roses fan, and I am sure not too many people will be a fan of me saying this, but it is cool to work on every end of the spectrum. By that I mean, I am working with a guy who was there at the very beginning, Steven Adler, all the way up to the guys who are in the band now. Whether that ties the two things together, I can tell you 100% that it does not, but it is really cool to hear the stories and the history of the band. If you think about it, as far as I am concerned, they are the band of my generation. You had The Who, Led Zeppelin and The Beatles for previous generations. As far as rock bands and anyone that is in their early thirties to forties, our band is Guns N’ Roses or Nirvana but definitely one of the two.

Have you had a Spinal Tap Moment on stage?

[laughs] This entire tour has been a Spinal Tap Moment! [laughs] The most recent one was about a week and a half ago. We played a show called Cornstock. It was held in a huge corn field. Big, big show! Tons of people, great show! However, when we got there the promoter came onto the bus and said “Fellas we have a little bit of a problem here. See that there inflatable beer can?” because it was sponsored by Budweiser and they had one of those giant fifty foot beer cans. They had to tear down the entire stage and move it around this beer can. All I could think about was Stonehenge! It was what Stonehenge should have been if it were a can of beer! We had to wait four hours in the sun due to a giant inflatable beer can, so that was very Spinal Tap. Whoever wrote that movie must have been in a band or followed a band around because they were dead on. They actually predicted the future in a lot of ways. They always say watch Spinal Tap and then go on tour for ten years and then watch it again, you will be laughing so hard your ribs hurt! [laughs]

What should we be on the lookout for from you in the coming months?

Definitely the new Adler’s Appetite record! Right now, I have a song out in the new Sandra Bullock movie The Proposal, so if you feel like hearing a song by Beautiful Creatures in a Walt Disney picture, a family movie, that was written by a very un-family band, check that out! [laughs] It is pretty cool! Also look out for possibly some more Paul Reed Smith Road Show dates and a ton more of Adler’s Appetite dates, that’s for sure!

There's much more to this interview, and you can read the entire thing here.
posted 10:17 PM