Some Things Didn't Work So Well

The Daily News has a short piece today on their Gossip page that says Axl Rose has fired and rehired his manager, Irving Azoff, at least three times in the last five weeks. It also says that Rose is an "admitted manic-depressive." This is untrue - Rose has never admitted to having a mood disorder. The fully story after the jump. 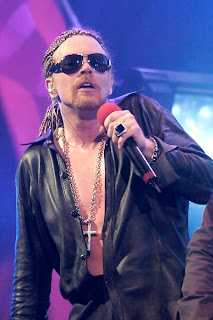 Axl Rose has been having mood swings. The Guns N’ Roses front man, an admitted manic-depressive, has fired and rehired famed manager Irving Azoff at least three times in the last five weeks, according to a source. The reclusive rocker is said to be resisting Azoff’s pleas to try to revive sales of the band’s recent album, Chinese Democracy. “Axl doesn’t want anything to do with it,” says the insider. “He won’t come out of his house.”

A source close to Azoff admits, “Axl is Axl. People get hired and fired all the time in this business.”

But Azoff’s rep says that, as of last week, he and Rose are talking again: “We’re in daily contact with Axl, and we look forward to continuing to support him and Guns N’ Roses.”
posted 7:56 AM

who fucking cares?? where is the fucking better" video???

yeah, he should just die cuz you didn't get what you wanted.

That was intelligent.
-Deb

C'mon people...u're gonna believe a piece that states that axl admits he has a mood disorder?!

If axl doesn't do anything with the album, let him be. Remember Prostitute lyrics?