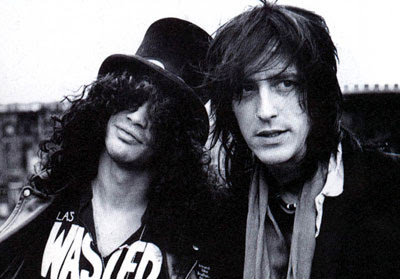 "There is an unmistakable sound that me & Izzy's guitars make when performed together."Holy Guns N' Roses Batman! I just heard this news. I am so psyched for this album.

It's good news for the Slash album, I suppose - but in fact, overall - I'm pretty disappointed to hear this.

With all that's come and gone, I'm firmly on Axl's side of the trenches, and I think that even though Izzy doesn't see the damage he might be doing to Axl by playing with Slash, I'm just about certain that Axl will perceive this as another moment of betrayal.

The fact is this:

That whereas Axl has tried really hard to make something fresh and interesting, and more so - to make something that's actually authentic - Slash has basically been running the mill, headless of art, and originality, just pumping out really quite mundane music - through Snakepit and then through VR - so much so that I don't expect we'll see any reversal of this trend with his new 'solo' album.

Even the top hat is getting ridiculous. I mean - man, it's been over 20 years now, does he really still think he needs that hat to be identifiable? Is he afraid of losing 'brand recognition'? I never had anything against this in the old days, but dude - it's been more than TWENTY years - I find it hard to believe that during this time he hasn't once thought 'maybe it's time for a change' - the top hat has come to symbolize (in my eyes) the reasons why Axl could no longer work with Slash. Slash found his 'gimmick' years ago, and it's become his crutch.

I totally disagree with you about Axl. If you read the book Slash (of course written by the man Slash himself) you will find that after the creation of GN'R, down the road a while, Axl tried to take total control of the band. "By then all 'band' decisions were being made by Axl and Doug Goldstein. Duff and I and the other members were ingormed of what they'd decided by phone calls and faxes- Guns N' Roses had officially become a dictatorship." (Slash, page 389-390) Axl was completely controlling the band when the point of being in a band is to have the whole group come together and decide what to do in a vote or however the GROUP decides to make decisions. Izzy can do what he wants, because in my opinion, Axl was in the wrong making all these decisions by himself without the other members of the band.