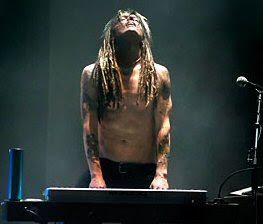 Dizzy Reed & Friends will be appearing at The Viper Room every Saturday in August at 10PM.

The Viper Room is at 8852 West Sunset Boulevard, in West Hollywood, California.

I'm going to go ahead and guess that this latest Dizzy Reed project is in someway related to his "upcoming" solo album.

Featuring keyboards and vocals by Dizzy Reed, and lyrics by Del James and Dizzy Reed, the album was recorded over the past 5 years or so in California.

The disc is due out sometime this century.

I've been looking forward to hearing more of Dizzy's material ever since I heard these 2 tracks of his from The Still Life Soundtrack.

I really do like his voice and I hope the new material he's got has the same "glam" feel as these 2 tracks.

Did I mention that I love Bowie and T-Rex?