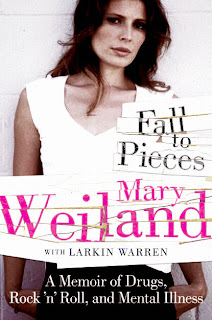 Mary Weiland, the estranged wife of Stone Temple Pilots/ex-Velvet Revolver singer Scott Weiland, will publish her memoir, Fall to Pieces, on October 27, 2009 via William Morrow, an imprint of HarperCollins Publishers.

A description of the book reads as follows:

On the surface, Mary Weiland had a fairy-tale life. She was a highly paid fashion model married to successful rock star Scott Weiland, the notorious frontman for Stone Temple Pilots and Velvet Revolver. Then came the rampage in a Burbank hotel room and the resulting media frenzy that revealed to the world her bipolar disorder and drug abuse.

In Fall to Pieces, Weiland describes the extreme highs and lows of her life, the volatility of which long hinted at mental illness. Working with acclaimed journalist Larkin Warren, Weiland tells her story with refreshing candor, unflinching detail, and more than a little humor. Reminiscent of celebrity memoirs by Tatum O'Neill, Brooke Shields, and Valerie Bertinelli, Weiland's story offers a window into the world of modeling and rock 'n' roll celebrity while providing deep insights into a serious and misunderstood psychological disorder."

Scott Weiland had this to say regarding the book:

"When I was 16 years old I dreamed of being a famous rock star. I never knew what came along with it - the good, the bad, and the straight up bullshit. I thought that creating beauty would bring beauty... Not always. At 16, Mary dreamed of being a famous model. She came close but she gave up her career for Noah, Lucy, and myself. She never got to see the 'what could have happened.'

Well as everyone knows by now we are getting divorced and yes, Mary is writing a book which I have not read. But what I want everyone to know is that it has nothing to do with infidelity. Neither the divorce, nor the book. Please don't place the red letter upon my children's mother.

One last thing... My love for her will never end. We just forgot how to be friends. She has now chosen a public career and one that brings both accolades and public scrutiny. There will be more of this sort of thing to deal with as time goes by... both good and bad.

Divorce is hell, I remember it well and we deal with it every day. And if you think about it, we both have our 'what ifs' and 'why nots,' but it's no cheaters story and all I ask is to not see her cry."