A HUGE "Thank-you" goes out to eye2eye at the Chinese Democracy Forum. 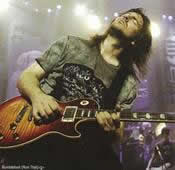 Q : Which song on Chinese Democracy did you contribute the most to?

Ron : Oh, that's not an easy question. In "Shackler's Revenge" there is of course my solo. But sometimes I played things normal listener won't hear. For example in the song "I.R.S". I don't play solos on this, but I laid down a lot of guitars in the background, the most among the Chinese Democracy songs. They're not heard at first, but they're there for sure. Only know, when we start to play those songs during rehearsals, I start to remember how many guitars I recorded. I totally forgotten about them. Hmm, if I have to point songs with my biggest contributions I'd choose "Shackler's Revenge", "Catcher in the Rye" and "Chinese Democracy" on that one my rhythm parts changed song a lot. I also used fretless guitar on "Scraped". Those songs really show my guitar playing. Also I add small parts here and there, for example short bluesy solo at the end of the second verse of "Better". Generally I really like my rhythm parts, for me they're the most important think I recorded, they changed a lot. After those parts songs became more rock n' roll than industrial.

Q: What do relationships inside the band look like? Is it democracy inside or it is "Chinese democracy" with one man rule?

Ron: I'd say that there is democracy inside. We all have great contributions to the band, we share opinions, ideas. We all make choices...People from outside like to make theories, that in GN'R there is only one man ruling. It's not true. Of course, Axl has all the rights to the name. If some is to make a definitive decision, of course it's up to him. But it's not a dictatorship. He treats as all very well. And we respect it. I won't run all over the world with statement that Guns N' Roses is my band and everyone do what I tell to do. We won't behave that way, Axl as well not. As far as ideas - musical or other are concerned everyone gives opinions and we all are interested in all points of view, others feelings.

Q: Do you meet each other outside the studio?

Ron : Of course. There are weeks, when we go out together almost every day, sitting whole night and going into trouble (laugh). We're in touch all the time. For example last week I went to San Diego to play charity show with Nashville country artists. I played on acoustic guitar with them, then as a band member. It was all for navy veterans. On the way there I exchanged about 30 messages with Axl , basically doing jokes all the time. It's how it look like. Last night, phone rings, I reach for it and I see funny message from Axl I replied immediately. And we write to each other like this all the time almost without stop. Or Richard sent us all e-mails in which he was making fun of George Bush. Yesterday I, Frank and guys from the band were at the hotel and started a party. Customers made a lot complains about noise , co we have to go down to continue party in the lobby. We all make such things as it happens in the pack of friends.

Q: How often do you make rehearsals?

Ron : I've been in L.A. since January. At first we had try-outs for new guitar players. Then I took care of my equipment: amps, etc. I was checking what would be the best for the tour, it took some time. Also we needed some tweaks when DJ joined us. Those months were very intense, because of practicing all the stuff. I hope we'll move our asses and start touring.

Q: Is there any new material played on those rehearsals?

Ron : At the moment no. We're focused on Chinese Democracy. We must played that material through before we do something new. I feel that we are not finished with it - no matter how stupid it sounds. We didn't do everything what is right, with that album. We didn't make a tour, some other things lacked. So before we start something new, we must be sure that we did everything he could with that album.

Q: There were information about Chinese Democracy being first part of trilogy, It is rumored that the material has been already recorded. Or maybe you started recording something new in that line-up?

Ron : I would like it to be that way, to create together. But I played on many other songs, I added solos, rhythm parts, fills some of them didn't make it on the album. I don't know if it be a trilogy out of this or it was only a rumour , which gone out of control. Maybe there was such idea, but ideas change. When you record an record, you start with one idea, but finish with something totally different and have to discard previous ideas. It's hard to say, maybe on the one stage there were plans of doing trilogy, but as far as I'm concerned I don't think it will happen. But it is possible it was an idea or it was only loud thinking and someone took it as a definitive plan. It happened with my albums as well. Last one was supposed to be double - one CD with heavy stuff, second with ballads. I discarded that idea and I created Abnormal.