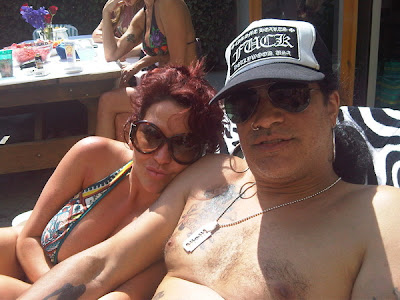 Slash and his wife had mixed results in court today in their bid to recover more than $500,000 they say they lost in a transaction involving a Hollywood Hills home.

However, the judge said he wanted to consider the matter further before making a final decision.

On a second issue, Recana said the couple's lawyers cannot begin collecting information on the defendants' financial worth unless a jury finds they acted with malice, oppression or fraud.

The Hudsons' lawyers wanted to begin gathering the financial data sooner in preparation for a possible punitive damages phase of the trial.

They allege Sotheby's and Holcomb acted in conscious disregard of the Hudsons' rights by not telling them they were entitled to a preliminary title report.

The plaintiffs' lawyers also argue the Hudsons should have been told they could have backed out of the purchase if they chose and gotten a refund of their $186,500 deposit before escrow closed.

Slash and Perla sued in November 2007. They allege they were not given proper disclosure about the home, including that it was much smaller than 7,800 square feet, as listed, and that there were other issues with the title to the property.

In a sworn declaration, Perla Hudson said she and her husband closed escrow on the home in January 2006 for $6.25 million, then sold it in November 2007 for $5.725 million without ever moving in.

The couple lost an additional significant amount of money in carrying costs on the property, while Holcomb received a commission of nearly $124,000, the Hudsons' court papers state.

In choosing a home, Perla Hudson stated she and her husband also were concerned about security for themselves and their two young sons, after being forced in the summer of 2005 "to obtain a restraining order against a deranged fan."

Defense attorneys say punitive damages should not be available to the Hudsons because there is no evidence anyone in authority at Sotheby's was responsible for approving anything Holcomb is alleged to have done wrong.

The lawyers also maintain there was no way their clients could have known that the MLS description of the home was incorrect and that it was not actually on a private street as the Hudsons had thought.

The trial of the suit is scheduled for Sept. 21.

Slash must have been high when he bought that house.

Made a bad deal, need to pay the lawyers...go sue the next victim.