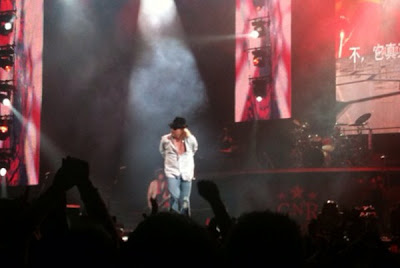 Then nothing. No tour to support the album and only one promotional media interview from the reclusive frontman.

At least a bunch of people in America got a free Dr. Pepper.

A year later Rose announced he was ready to hit the road in support of the long-awaited album with four shows in Asia and 13 in Canada, the first in Winnipeg at the MTS Centre on Wednesday where they last played in December, 2006.

Why they chose to tour Canada in January, and start in Winnipeg, is anybody's guess, but the 2010 live version of Guns N' Roses is a sight to behold. The show is a massive rock 'n' roll spectacle as 7,500 fans witnessed Wednesday during a two-hour and 50-minute show featuring most of the new album and the band's greatest hits.

The unofficial over/under betting line on the band's start time was 10:30 PM, and anyone who knows anything about GN'R would have had their money on over. The group took the stage at the perfectly decent time of 10:45 PM, 75 minutes earlier than in 2006, but still more than an hour after opener Sebastian Bach left the stage.

A series of fireworks encircling the stage exploded to start the show before the opening chords of "Chinese Democracy" kicked in and Rose ran on stage zigzagging his way through his seven-piece band. He was in constant motion throughout the whole song, looking a little like Kid Rock in jeans, a white shirt and fedora, albeit with more facial hair.

More explosions signaled the end of the opener before the familiar riff to "Welcome to the Jungle" rang out and a huge roar erupted from the crowd as Rose screeched, "do you know where you are? You're in the jungle, baby. You're gonna diiiiiieeee."

He dumped the hat to reveal a red bandana (and no cornrows!) during the song and showed off his two favourite dance moves - that weird serpentine slither and a series of herky-jerky bounce steps - which would be repeated numerous times throughout the night whenever the 47-year-old wasn't running around on the massive stage shaped like the top half of a chalk outline of a body with fluorescent orange tape providing the piping. The circular "head" jutted out from the main body and two "arms" extended out on either side, curving slightly when they hit the seats. The drums were on a riser on the stage's torso flanked by two sets of stairs which ran up behind it while a set of circular lighting rigs with its own LED system moved vertically above it.

Rose's distinctive nasally whine is still in fine form, as he displayed on the swaggering "It's So Easy" and the drug ode, "Mr. Brownstone," two classics from the band's 1987 debut, Appetite for Destruction, that help open the show. He looked and sounded as good as ever, but still relies on TelePrompTers to help out in case he forgets some lyrics.

And he even appeared to be enjoying himself, flashing the occasional smile and offering up some between song banter with the crowd.

"It's nice to be with you tonight. It's nice of you to turn up the heat for us while we're here," he said, referencing the warm weather, before launching into the new "Shackler's Revenge," which gave his three guitarists - Ron "Bumblefoot" Thal, Richard Fortus and DJ Ashba - a chance to show off some riffs Slash didn't write and allowed Rose to head backstage, something he did often throughout the night.

Massive flames shot in the air and concussion bombs exploded for the band's wall-of-guitars cover of "Live and Let Die" before they slowed things down with "Sorry," "If the World" and "Street of Dreams," three new songs that show off Rose's two best-known sides: ticked off and tender.

They got back into the hard rock boogie with "Better," before pulling out some more old faves, with the caustic "You Could Be Mine," "Sweet Child O' Mine" and "November Rain," featuring Rose playing a grand piano at centre stage. Each song was given extra heft by the sheer amount of musicians on stage, each of whom got his own solo.

The metal-blues drinking anthem "Nightrain" finished the main 130-minute set before the band returned for a six-song encore, highlighted by "Rocket Queen," the ballad "Patience" and customary show closer "Paradise City," climaxing with confetti being shot into the audience and more explosions.

"Have a good night, be safe. We love you and we'll see you again," Rose said after he and his band mates took a bow.

Knowing Rose, anything is possible.