Guns N' Roses Worth the Wait 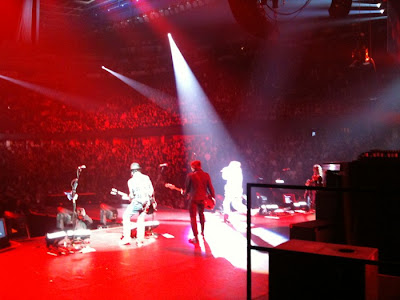 Calgary Sun
Axl Rose would never be accused of being the most punctual guy.

But the fact the Guns n’ Roses frontman made it to the stage at all Saturday night was something to celebrate.

The last time the band was in town, three years ago, Rose and co. didn’t start the show until almost 11:30 p.m. That they kicked into their first song, the title track from Chinese Democracy, at 10:15 p.m. was a downright miracle. But — and I have to say I wasn’t expecting much — the show was well worth the wait.

The group made a spectacular return to Calgary, playing to about 9,000 dedicated fans.

While G n’ R played several tracks from its latest CD, 2008’s Chinese Democracy, it was the hits from Appetite and its successful follow-ups 1988’s G n’R Lies, and 1991’s Use Your Illusion I and II that got the fists pumping.

“Do you know where you aaaarrre?” Rose screamed at the crowd during a killer version of the radio staple Welcome to the Jungle, early on in the set. The fans replied with an resounding affirmative roar.

One of the loudest singalongs of the night came courtesy of the band’s cover of Live & Let Die, originally performed by Paul McCartney and Wings and Knockin’ on Heaven’s Door, another cover, this one originally a Bob Dylan tune.

But it was apparent most of the 9,000 fans who took in the Saddledome show were there to see Rose.

Bounding on stage wearing jeans and black fedora, the 47-year-old singer was remarkably energetic and his voice was generally in good shape.

Toronto’s Danko Jones started the night off right with a blistering set of stripped-down rock and roll.

Sebastian Bach had more success getting the crowd revved up, but he also had the benefit of being the lead singer of one of the biggest hard rock acts of the 1980s — Skid Row.
posted 9:40 AM