GN'R to be Eligible for Rock Hall of Fame? 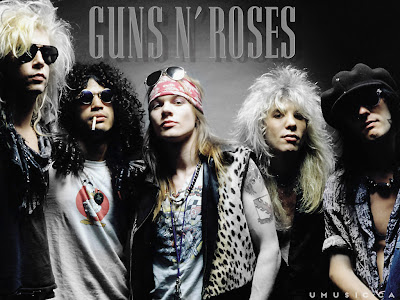 TheROCKradio.com
Acts such as Nirvana, Guns N' Roses, Green Day, Kid Rock, and the Smashing Pumpkins will automatically become eligible for induction into the Rock and Roll Hall of Fame if the institution changes its induction policy for 2011.

According to a report by Showbiz411, Jann Wenner, the founder and publisher of Rolling Stone and chairman of the Rock and Roll Hall of Fame Foundation, is considering having the Rock Hall's charter changed so that nominees for the Hall could become eligible 20 years after their recorded debut instead of the current 25 years.

Showbiz411 claims that Wenner is looking to bring bigger and fresher names into the Hall since the list of potential "new" inductees has grown smaller.

According to the post, under the current guidelines, apart from Sting becoming eligible as a solo act, the other top "new" acts eligible include 'Til Tuesday, Chris Isaak, Suzanne Vega, and Simply Red.

The Hall will induct Genesis, the Hollies, Iggy Pop and the Stooges, Jimmy Cliff and ABBA this year. First-time nominees Kiss and the Red Hot Chili Peppers did not make the cut.

What? All those guys haven't made it? KISS are one of the biggest bands ever! I'm a huge GN'R and Green Day fan, but jeez! Rush, Judas Priest, Cheap Trick, how are they not in? I need to find out how they vote!