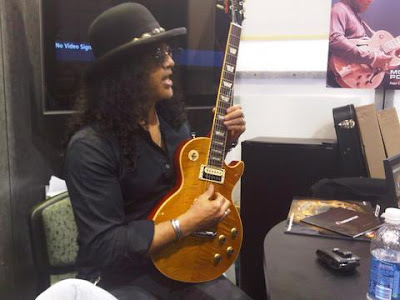 Harmony Central conducted an interview with Slash at the Sabian booth at this year's NAMM (National Association Of Music Merchants) show, which is being held January 14-17, 2010 at the Anaheim Convention Center in Anaheim, California. Watch the chat below.

Raw, unrelenting and "in-yer-face" from start to finish, this was the record that redefined rock music in the '80s. The lyrics were incisive and the music uncompromising, completed by Slash's inspired fretboard mastery and unique sound, regarded by many as the ultimate rock tone.

The intriguing history of the Marshall amp used by Slash on Appetite For Destruction and its subsequent disappearance has now passed into rock folklore. Widely believed to be a hot-rodded, 100-watt, pre-master volume model from the early '70s, this legendary amp was hired specifically for the Appetite sessions in 1986. Eager to hold on to the amplifier, Slash told rental company S.I.R. that it had been stolen, only to have it "stolen" back a year later during tour rehearsals. Ever since there has been little to no word on the whereabouts of that mysterious 100-watt head, synonymous with a true rock icon and one of greatest rock albums of all time.

Now Slash and Marshall Amplification have joined forces to re-create that revered "Appetite tone" with the announcement of the new Marshall AFD amplifier. Fans around the world will be able to track the development of this incredible project online, from drawing board to stadium.

Inspired by the axe that the legendary Guns N' Roses guitar hero played on the multi-platinum selling Appetite for Destruction album and practically every recording since, this may be the most highly anticipated guitar launch of the year.
posted 7:51 PM