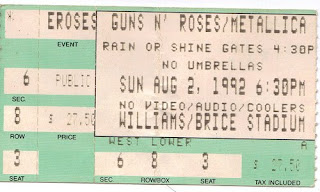 LA Times
Giving its blessing to a deal that could transform the music industry, the Justice Department on Monday approved the controversial merger of the nation's dominant ticket seller and the world's largest concert promoter -- but only after extracting major concessions to address concerns that Ticketmaster and Live Nation would have a stranglehold on ticket sales.

The merger, which was the first major review for Obama administration antitrust regulators, will create a goliath with hands in every pocket of the music business. The newly formed Live Nation Entertainment would have the ability to book concerts, sell tickets and merchandise, and manage artists all under one roof.

But for the $889-million deal to proceed, the two companies agreed to the unusual step of creating a pair of rivals to ensure a competitive market for ticket sales, which has been one of the few bright spots for the ailing music industry.

"This goes beyond what is normally provided for in a settlement by creating two additional competitors who can go up against the behemoth," said Matt Cantor, a law partner at Constantine Cannon who specializes in antitrust issues.

A proposed settlement filed by the Justice Department, along with 17 state attorneys general, spells out measures to resolve concerns about competition.

Under the agreement, Ticketmaster will give Anschutz Entertainment Group access to its technology so that AEG -- which owns and manages nearly 100 venues including Staples Center -- can create its own ticketing service.

Ticketmaster would also be required to divest a subsidiary that provides software for venue operators to sell their own tickets. Comcast Corp.'s sporting events division, Comcast Spectacor, has signed a letter of intent to acquire the Irvine-based subsidiary, Paciolan.

Live Nation Entertainment also is prohibited from retaliating against venue owners that defect to competitors.

When it was announced last February, the proposed merger of two concert-industry juggernauts brought immediate protests from consumer groups, smaller competitors and artists including Bruce Springsteen, all of whom worried about Ticketmaster's growing power and its potential to ratchet up prices.

On Monday, some groups representing consumers and smaller competitors reacted guardedly to the Justice Department's recommendation.

"While we appreciate the efforts of the DOJ to extract meaningful concessions from the parties, we remain concerned that these two companies, with a history of anti-consumer behavior, will abide only by the letter and not the spirit of the settlement agreement," said Sally Greenberg, executive director of the National Consumers League.

Proponents of the merger, including its chief architect, Ticketmaster Chief Executive Irving Azoff, say the deal will help revive the music industry by creating a more efficient process to deliver music to fans. Opponents contend that it grants too much control to a single entity and will result in higher ticket prices.

The combination is the first major merger reviewed from start to finish by the Obama administration and was considered a test of how it would respond to a major industry consolidation.

The Justice Department said in legal filings that the merger, as initially proposed, would eliminate competition in the market for ticket sales, creating less pressure on the fees charged and potentially less innovation. No existing player, they said, would have the resources to compete.

"After a rigorous investigation, we concluded that the transaction, as originally proposed, was anti-competitive," Christine Varney, assistant attorney general in charge of the Justice Department's antitrust division, said at a news briefing Monday. "We were prepared to litigate this case, and I told the parties that."

The two companies have spent the last year trying to demonstrate that they're not the Darth Vader of the concert industry.

Last year, for instance, Live Nation and Ticketmaster instituted "no-service-fee Wednesdays" and reduced prices on lawn seats at Live Nation's network of amphitheaters around the country to draw more fans.

Jim Guerinot, the manager of No Doubt and Nine Inch Nails, said he was initially skeptical that the merger would win the Justice Department's approval. But over the last year, he said, the two companies have tried hard to work with artists.

"Since these guys have been, if not married, then living together, I've gotten a tremendous amount of cooperation," Guerinot said

Ticketmaster has dominated ticket sales for major concert events for two decades. In 2008, it sold more than 141 million tickets worth more than $8.9 billion and had a market share of more than 83% for major venues, according to concert-industry tracking publication Pollstar. Its next-biggest competitor's share was just under 4%.

As recently as 15 months ago, it appeared that Ticketmaster would face major competition from Live Nation, which in December 2008 began selling tickets for its own venues and for others. It quickly gained traction and grabbed 16.5% market share -- nearly all from Ticketmaster, according to documents filed by the Justice Department.

Just two months after Live Nation's entry into ticket sales, the two companies announced their intention to merge into a new entity with a combined value of about $2.5 billion.

Live events have been the only relatively healthy segment of the ailing music business in recent years. In 2009, North American concert revenue was a record $4.4 billion, according to Pollstar, a 10% increase over the previous year.

Ticketmaster and Live Nation executives have argued that the merger would benefit consumers. "It will give us greater flexibility in how we promote, market and sell tickets to events," Ticketmaster's Azoff said in February at a Senate Judiciary Committee hearing looking into the deal. "It will give us a pathway to alternative pricing and fee structures."

The Justice Department took a differing view and refused to let the deal go through without significant revisions.

"I think the Department of Justice got a good settlement for the consumer and at the same time gave the businesses involved at least a chance at the promised efficiencies," said Jim Rill, a partner at the Howrey law firm, who served as assistant attorney general in charge of antitrust under President George H.W. Bush.

The proposed settlement would have to be approved by a federal judge after a 60-day comment period.

Based on Monday's closing prices, Ticketmaster shareholders would receive nearly $889 million of Live Nation stock, which would give them 50.01% control of the combined entity. Azoff will be its executive chairman. Michael Rapino, chief executive of Live Nation, will retain his title.

Some longtime critics of Ticketmaster and Live Nation welcomed the heightened scrutiny that the proposed 10-year settlement would bring the companies after they merge.

"This puts Live Nation Entertainment under a microscope, a place we wished Ticketmaster and Live Nation were under a long time ago," said Seth Hurwitz, a Washington, D.C., club owner and concert promoter.