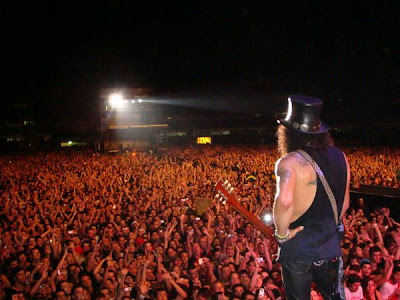 via Blabbermouth
Slash's debut solo album, Slash, will be released in Japan on March 24 via Universal Music.

A special edition of the CD will include a bonus DVD featuring making-of-the-album footage and a free poster in the first pressing.

Slash is scheduled for release in the US on April 6. The CD will be made available in Europe via Roadrunner Records.

Slash will see Roadrunner Records enter into a unique and innovative association with a UK media partner — the special-interest media group Future. In a brand new concept in record distribution, the standard album release will be preceded by a "Fan Pack," in which the Roadrunner Records album will be bundled together with a highly collectable, 132-page special issue of Future Publishing's Classic Rock magazine dedicated to Slash's career. This will be the first format of the album available anywhere in the world.

The partnership is a first for music and media industries, marking the first-time a major new album has been released this way. The partnership ensures that Slash's new album is available through over 4,000 UK retailers that stock Classic Rock — sidestepping the issue of dwindling high street music outlets and top 20 only stocking in supermarkets. Classic Rock is one of the UK's biggest rock music magazines and this year recorded its eighth consecutive circulation increase, the only paid-for music magazine to grow.

The Slash "Fan Pack" featuring his debut solo album from Roadrunner Records, along with a 132-page "Classic Rock Presents: Slash" special will have a cover price of £14.99.

eToro is the most recommended forex trading platform for new and professional traders.