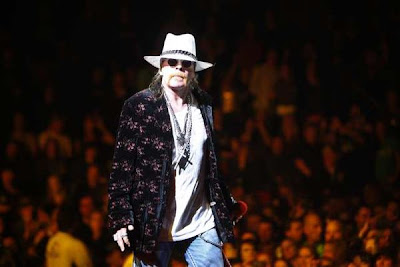 Early Saturday morning in Seattle, Guns N' Roses singer Axl Rose sat down for a long, freewheeling interview after his band's three-hour concert Friday night at Key Arena. You can read a story about the exchange here, but left on the cutting-room floor was an hour-and-a-half of fascinating conversation in which a sharp, well-spoken Rose tackled many topics that fans have been discussing for years.

Over the course of the interview, which took place from 2 a.m. to 4 a.m. in his dimly lit dressing room, Rose talked about the past, present, and future without pulling any punches. (So much so that we edited out some of the more potentially libelous business-industry accusations Rose leveled.)

Pop & Hiss will have a few more excerpts of the conversation in the days to come. Check back.

Los Angeles Times: Can you talk about the L.A. show at the Forum on Wednesday night?

Axl Rose: Well, LA will be interesting. I’m looking forward to it. We had a great time in ’06. We did three nights at the Gibson. But this year was very weird because the industry was trying to force us into a smaller show — just one, and then make it two. But the real thing about it is that the sound’s not that good at the Palladium — and why are we going down, when we can draw more? So we’re doing the Forum, but it really wasn’t done right. We had to fight for that. [Rose goes into a long tirade about specific industry executives.]

This whole tour is part of — it’s not like there’s a lot of money going to Live Nation or anything, but it’s part of how we worked out the settlement [with former manager and Live Nation exec Irving Azoff]. And I could have gone on to court, but that was going to block other things, so Live Nation's not getting paid, we’re not getting paid, but we’re putting it out of the way, so we did this tour. Then we get on the tour and find out that everything that was supposed to be done wasn’t done, and managers and agents are selling a show that was supposed to go on at 8 o’clock. They knew I was never going to do that.

And this lack of promotion is one reason I’m here? [Laughter]

And you were talking about adding a second show?

And I know we can do it in L.A., but what happens is people are really good at saying what you want to hear. So you go, yes, yes, yes, yes, and then they do something completely different. "That’s awesome. That’s a great idea!" And then they do everything they can to block it and make sure it doesn’t happen. That really happens. To me, they can’t ... do anything and they don’t want to do anything unless they feel that they’re getting away with a scam. They can’t feel they’re doing something that’s legitimate, and feel that kind of pride, they have to feel like, I got it, I ... them over, da da da. And that’s their victory.

All these managers, they know one thing. They know that they can at least ... sell a reunion tour and get their commission. It’s just a phone call. It’s a half a day’s ... work, or however long they want to keep the bidding war going. They get their commission and they don’t care if it falls on its face.

Because, really, you can get guys from the "Illusion" thing, but the only thing that would make it would be Duff and Slash, really. It’s nothing against Izzy and it’s nothing against Steven, or anything like that. Steven may want it, but these guys I’m working with right now, they work really hard and it’s hard work. I’ve toured with the other guys and I’ve also seen what they’ve done since, and I just know the difficulties.

I don’t have an excitement to work with people that joined in the "Illusion" time. There’s behind the scenes that was really, really difficult there with different ones. So it’s not really even a full reunion. And these guys have been here a long time, whether the public knows it or not because we haven’t done the media like that. Tommy’s been on 14 years, Richard’s going on 11. That’s as long as Duff was in the band. Chris has been in going on 11, Dizzy’s on since "Illusion," Frank’s going on six, and so’s Bumble. These guys have been here. And DJ’s going on three.

Plus, we can have our differences, and everybody in the band can be like, ‘I don’t understand that guy’ and point at one of us, you know? But at the same time, we get along. I don’t have to tell these guys what to do onstage. I can suggest something at times, but that’s very little.

But it’s also that you’re clearly the boss in this band — it’s your band. Correct me if I’m wrong, but that wouldn’t necessarily be the case with the original lineup.

With live, it’s not really any different, because there was never really a fight about leading it live, because for whatever reason they were fine with whatever song I was going to do next, singing.

Congrats on the rock hall of fame.

Congratulations on that too. Can you talk about how you found out?

[Rolling Stone co-founder publisher and rock hall co-founder] Jann Wenner was excited about it 11 years ago. So I was pretty sure he wanted it, because he was very excited in — when did I do the Elton John thing, was that '93 or '94? He was excited then. And he’s always been a fan, and at the same time Rolling Stone has done some of the worst damage ever.

I’ve got mixed emotions about what the Rock and Roll Hall of Fame actually really is, but at the same time, there’s a lot of people — the fans — that it just means something to them, and they’re happy. It’s like you won the Heisman or something. I have people of all ages — in Indiana, I hadn’t been there in 18 years, and you’ve got elderly TSA guys, a hundred pounds overweight, come up and they’re happy. So I don’t want to take that away from them.

I think about it in terms of ... when Michael Moore got up at the Academy Awards and said whatever about George Bush. People don’t want that associated with their awards shows, even if you have a big audience. In one way it might be right, but it usually backfires on whoever does it. So I really don’t want to spoil it for everybody else — and take the beating. [Laughs]

It is kind of a mixed blessing.

It’s a lot of people making money. Why do they get to decide? But it’s the same with Grammys or Academy Awards, who wins.