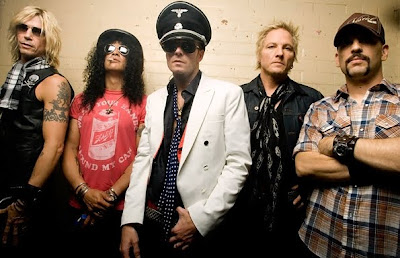 Rolling Stone Exclusive
Guitarist Dave Kushner got the group back together to honor his late best friend
by: Steve Baltin

When Velvet Revolver – Slash, Duff McKagan, Matt Sorum, Dave Kushner and Scott Weiland – reunite for one show next Thursday at L.A.'s House Of Blues, it will be the result of Kushner. The band's guitarist brought the group back together to honor his best friend, musician John O'Brien, who was found dead at the age of 45 in his Chicago hotel room last August.

"I found out he passed away on August 20, and it was like out of nowhere," Kushner exclusively tells Rolling Stone. "Next day I was in shock and my wife said to me, 'You gotta have a benefit concert for his wife and you have to get Velvet Revolver back together.' That’s how it started."

He then approached the different band members. "We did a benefit show for this thing called Road Recovery – me, Duff, Slash and Matt – in New York, and that’s when I asked those guys individually if they would agree to do it," Kushner says. "Once they said so then I got in touch with Scott, and he agreed."

Kushner says the response was almost instantaneous from everyone, something he attributes to how loved O'Brien – a childhood friend of Kushner's – was in the industry. "[John] was just like a teddy bear. He was the most talented, softest, sweetest, most generous person I’d ever met. He was the brother I never had, and everyone knew him," he says. "I’ve known Scott for 22, 23, 24 years. So he’s known John since then, Duff and John had an amazing relationship, and Matt knew him too."

The concert will also feature Maroon 5, Sheryl Crow, Tom Morello, an appearance from Stephen Stills and more. That will take the pressure off all of the bands, including Velvet. "Because we hadn’t played with Scott in a long time I said, 'Look, let’s just do three songs.' It’s not too much of a commitment," he says. "So we just got a bunch of people, everyone will do three songs."

Kushner is well aware though that everyone will be watching the first time in four years that Weiland performs with the group. "I knew from the beginning it would be newsworthy, and that was kind of the plan," Kushner says. "If you’re gonna do this, you want to raise some serious money, then put all caution aside and say, 'Hey, will you do this?'"

All of the proceeds from the benefit will go to O'Brien's wife and family. "Unfortunately, John didn’t have life insurance at the time and he left behind a wife that's pregnant and a four-year-old son. That to me is the main focus of why I’m doing this," Kushner says. "I’m doing it so that this sells out and that money can go to her, period."

Although the guitarist is focused solely on next Thursday's gig, he understands that others are interested in what the future might hold for Velvet Revolver, but the five of them are taking a cautious approach to any further reunions. "We haven’t played together in four years, and so we’re really just like, 'Let’s see how this goes,'" he says.

And if Thursday's show does go well? "I know everyone’s got other commitments, but I think everyone’s like, 'Let’s get this thing done and get through this and then we’ll see.'” 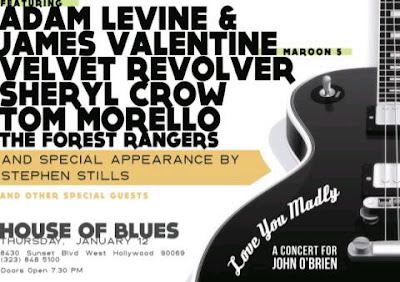