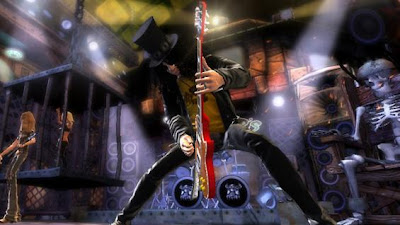 Radar Online
Universal Music Group is owned by Vivendi,the parent company who also bought Activision in a merger that created Activision/Blizzard in 2007. Activision/ Blizzard are also the makers of Guitar Hero III, which in breech of agreement/features Slash.

UMG/ Activision knows full well that recorded music is now in a seemingly irreversable decline,and it has actually led to so-called "360 deals" by signing bands in which the label gets a cut of everything,be it ringtones, itunes, merchandise, concert tickets etc.

The court date is set for January 23rd this month.

Guns N' Roses lead vocalist Axl Rose has filed a $20 million lawsuit against Activision for the company's unauthorized use of the song "Welcome to the Jungle" in association with former band member Slash.

"[Activision] began spinning a web of lies and deception to conceal its true intentions to not only feature Slash and [Velvet Revolver] prominently in GHIII, but also promote the game by emphasizing and reinforcing an association between Slash and Guns N' Roses and the band's song 'Welcome to the Jungle,'" the court documents read.

The documents lay out a timeline of e-mails and personal assurances issued by Activision that Slash and Velvet Revolver would not be featured in the game.

At one point, Activision Executive VP of Music Affairs Tim Riley allegedly addressed online rumors of Slash's inclusion in the game by telling a licensing representative, "Come on... you can't believe everything you read on the internet."

Rose alleges that Activision continued to misrepresent its use of Slash's image and Velvet Revolver songs in Guitar Hero III through to the game's October 2007 release.

Rose also alleges that Activision's use of Slash's distinctive, top-hatted image in promotion of the game -- including a prominent appearance on the box art --was in violation of Rose's licensing terms.

After the game's release, Activision allegedly offered Rose a Guitar Hero game based around Guns N' Roses album Chinese Democracy to make up for the deception, which Riley allegedly apologized for, saying he "can't sleep at night" in a 2010 meeting with Rose.

Rose is seeking access to Activision's "wrongfully acquired profits ... in excess of twenty million dollars." Activision representatives were not immediately available for comment on the case as of this writing.