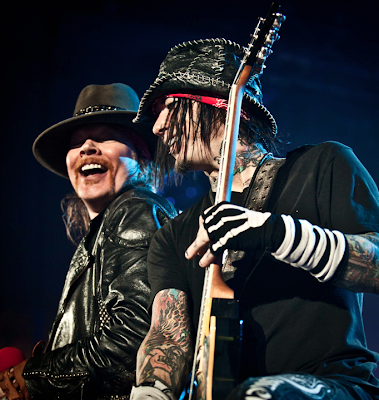 via Blabbermouth
Mama's Fallen Angels recently conducted an interview with guitarist Dj Ashba. You can now listen to the chat in the YouTube clip below.

When asked how soon fans can expect to hear a new GN'R album, Ashba replied, "I can't give anybody a definite date, because I'm not gonna give anybody false hope. But what I can say is [making a new album] absolutely is our main priority. And I cannot wait to get [working on it]. I mean, Axl has tons and tons of stuff recorded as it is. I mean, he sits there in his hotel room and he'll play me hours of stuff. And I've written over ten songs — I think 12 songs now — for him that he really likes. And I think now that we're off tour, we're gonna kind of start talking about, 'Hey, let's start piecing together what we feel would be the next best GN'R record.' It's absolutely everybody's goal to get out an album within a reasonable amount of time. That is everybody's focus."

Sixx: A.M. — the band consisting of Nikki Sixx, Dj Ashba and James Michael — has begun writing material for its third album. According to Sixx, the CD will "probably [be] a 2013 release considering the body of work we're setting as a goal."

7, the latest EP from Sixx: A.M., came out last month and sold around 2,700 copies in the United States in its first week of release. The effort contains acoustic versions of songs from the group's first two albums — 2007's The Heroin Diaries soundtrack and 2011's This Is Gonna Hurt.

Sixx: A.M. will be "doing a proper video" for its next single soon, according to Sixx. In addition, "tour options keep coming, but we haven't found the right fit yet to open up the conversations," Nikki writes on his Facebook page.

Sixx: A.M. recently revealed plans to film a video for the song "Skin" in the Los Angeles area. The band put out a casting call for people whom the song has affected personally because of their own scars — whether physical or under the surface.

Chinese Democracy, the 2008 album released by the current edition of GUNS N' ROSES after a 15-year wait, was officially certified platinum by the Recording Industry Association of America (RIAA) on February 3, 2009 for shipments in the United States in excess of one million copies.

Chinese Democracy was made available exclusively through Best Buy.

Discuss this article with other Guns N' Roses fans here.
posted 6:52 AM