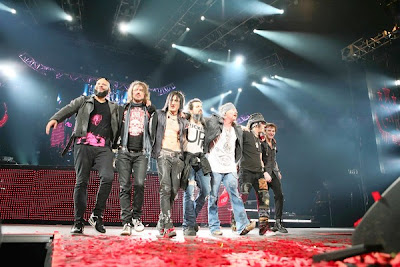 Axl Rose is busy touring with the current Guns N' Roses as the upcoming Rock and Roll Hall of Fame induction ceremony prompts speculation about a reunion.

Axl Rose is wearing a white cotton bathrobe and white tube socks, relaxing on a couch backstage Friday night after a three-hour concert at Seattle's Key Arena, where he'd snaked his way through 34 songs with a version of the band he co-founded a quarter-century ago, Guns N' Roses. It's 3am, and the singer, the sole remaining original member, has shed the bad-ass sunglasses and flat-brimmed Stetson-style hat he wore onstage, pulled off the snakeskin boots and changed out of his faded bell bottoms.

It's been a whirlwind year for the notoriously unpredictable and polarizing Rose. The Rock and Roll Hall of Fame recently announced Guns N' Roses' induction, 25 years after he and former core members Slash, Izzy Stradlin, Duff McKagan and Steven Adler set the Sunset Strip, and then the world, on fire. The announcement prompted speculation that at the April 14 rock hall ceremony in Cleveland, the original Appetite for Destruction lineup — a historically acrimonious lot with the opinionated Rose at the center — might perform together for the first time in two decades.

But this positive ray comes amid a stormy 2011 that has seen Rose, 49, fire two managers in the last year, the most recent of which, Peter Katsis, was let go in early December. Since the dissolution of that first lineup, the iconic singer has released just one album, Chinese Democracy, which he spent 13 years and millions of dollars making. And his current tour is part of a settlement agreement with former GN'R manager (and Live Nation Entertainment executive chairman) Irving Azoff that dictated the band do a number of performances with Live Nation as the promoter, and Rose is worried that it's not being properly marketed. He and Guns N' Roses bring this tour to the Forum on Wednesday night.

It's the kind of negative energy that can sap a person's creativity, says Rose, sipping on a beer, his auburn hair hanging over his shoulders pretty much the same way it did in the old days, a horseshoe-shaped red mustache complementing it. "Once I get the next things sorted out with the label, then I feel I can get to that creative place that I've been fighting to get to, and to use Guns N' Roses to do so," he says.

The problem is that while he believes that he and his GN'R — some of whom, like bassist Tommy Stinson and guitarist Richard Fortus, have been with him for more than a decade — is hitting on all cylinders now, potential business partners are looking at other factors. "Every manager comes in and wants me to make things smaller," says Rose. Guns N' Roses, for example, requires twice as many tour trucks as the budget calls for, he says. Why no one else can understand the band's needs is an obvious frustration for Rose.

More important, he adds, most managers want the same thing that nearly every rock 'n' roll fan of the past quarter-century wants, and the one thing he stubbornly refuses to do: reunite with Slash, Izzy, Duff and the rest of the classic GN'R group for a tour. The constant question is an albatross and leaves Rose not only tired but wary of anyone in the business looking to work with him. "All these managers, they all believe in one thing: sell a reunion tour and get their commission. It's just a phone call. It's a half a day's … work, or however long they want to keep the bidding war going. They get their commission and they don't care if it falls on its face."

This mistrust is partially the reason why Rose's current management team is more family than business partner. It's headed by Beta Lebeis, a Brazilian woman Rose met when she was his ex-girlfriend Stephanie Seymour's assistant; she began working for him after his tempestuous relationship with Seymour ended in 1993. Lebeis' two adult children, Fernando and Vanessa, round out the management group. Lebeis says that this arrangement is the result of an ultimatum she gave Rose after Guns N' Roses' most recent manager, Katsis, left the fold after less than a month on the job.

"We decided, 'No more managers,'" said Lebeis a few days after the Seattle concert. "Between me and Fernando and my daughter, we're dealing with the management." Lebeis added that she characterizes Rose as "more than a son to me," and that after Katsis' departure, "I told [Rose] if he hires another manager, I quit." One of the Lebeis three is almost always at Rose's side, be it in paparazzi photos or side stage during concerts, near the little makeshift dressing room that Rose frequently races into during guitar solos, or on that rare occasion when he actually sits down with a journalist.

As the clock pushes toward 4am, Rose's tone has shifted. He still has to do his regular hour-long vocal exercises before retiring for the night, and the venom of earlier in the evening he'd directed against various players in the music industry seems to have left his system.

Asked if music was still the driving factor in his life that it once was, Rose pauses. "Well, it wasn't for a long time. It was hard to make myself want to do the old songs again. It was like, I wasn't going around my house dancing to 'Jungle.' To even figure out how to even make myself move to those songs — and how I was going to move to them — that was a big thing to figure out in '06."

Based on the show earlier in the night, he's figured it out. Rose is proud of the big rock concert he and his band have created. Over the three hours, Rose (though a few pounds heavier than the lithe young rock star of Appetite days), moved quickly and deftly, sprinting from stage left to stage right, yowling with delight during "Shackler's Revenge" and "Sweet Child O' Mine," sitting at the piano for "November Rain." He offered classic cover versions of songs by AC/DC, Paul McCartney and Bob Dylan, and a solo piano rendition of "Goodbye Yellow Brick Road." And at points, he turned the stage over to his band members for solos and extended riffs. If his voice carried less grace and more heft at 49 than when he was gliding through the intro to "Civil War" two decades ago, he made up for it with sheer determination.

The enthusiasm he feels for this band is evident on his face, which lights up when talking about working with former Replacements bassist Stinson, guitarists Fortus, Dj Ashba, and Ron "Bumblefoot" Thal and the rest of the '11 Roses.

It's a far contrast to his demeanor when Slash's name comes up. Despite requests from Rose's publicist that he not be asked questions about the former GN'R guitarist, Rose himself mentions his ex-bandmate's name minutes into the conversation and locks onto the subject.

Slash was a late arrival into the Guns N' Roses fold, Rose loves reminding people, and apart from a few key riffs, says Rose, the guitarist was much less involved in the songs than Rose and Stradlin.

When he's asked the inevitable question — who will perform onstage as Guns N' Roses at the Rock and Roll Hall of Fame induction ceremony? — Rose is circumspect. These kinds of honors, while special to him, are also complicated. "I've got mixed emotions about what the Rock and Roll Hall of Fame actually really is, but at the same time, there's a lot of people — the fans — that it just means something to them, and they're happy. It's like you won the Heisman or something."

The last thing Rose wants to do, he stresses, is ruin it for others. He refers to Marlon Brando sending an American Indian activist to accept his Oscar and give a protest speech "and everybody getting … off, or when Michael Moore got up at the Academy Awards and said whatever about George Bush. People don't want that associated with their awards shows, even if you have a big audience. In one way it might be right, but it usually backfires on whoever does it. So I really don't want to spoil it for everybody else — or take the beating."

Then he said curtly of the induction performance: "There is no plan yet. There really is no plan. We're still busy with this lineup. We're gonna be busy — we're gonna be busy all next year. We'll be putting out new stuff as soon as we can figure out what our deal is with labels, blah blah blah."

As to whether he feels that he bears any responsibility for the state of limbo he's in, Rose says: "You can say it's my fault, but to me it's like if you're on a plane and somebody trips you and the air marshal arrests you for falling — like it's my fault for allowing somebody to trip me?"
posted 3:38 AM