In The Studio With Slash & Todd Kerns 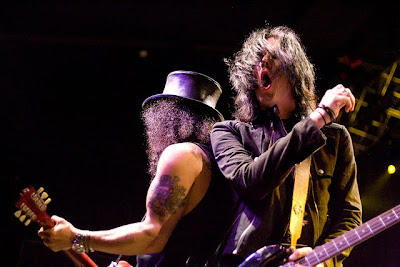 glide magazine
The bad ass in the top hat is busy. He is hunkered down in the Barefoot Recordings Studio playing guitar, as his crackerjack band-mates – Todd Kerns on bass, Brent Fitz on drums and Myles Kennedy on vocals – surround him as they record the old-fashioned way: on two-inch analog tape, a wet dream to those who love the pristine sound that comes from using this method over pro-tools modernity.

Last week, Kerns called in to give us a scoop on what has been happening inside that studio in the heart of Hollywood. The Dominator has been laying down some heavy duty bass lines for the boss and, as he notes, some damn good songs are coming to fruition. “We started demoing, just playing around with songs and things, riffs that Slash had brought in,” Kerns explained about the tunes in their virginal stage. “We had started playing with those on the road last year at sound-checks and rehearsals, so those kind of started to morph and metamorphosize into songs”. When Kennedy came in around mid-September while on a break from touring with Alter Bridge, “we went in and did three songs completely, with bass, drums, guitars and vocals.”

They returned to the studio in December where they “managed to do about a song a day and most of it live off the floor, the four of us. We were trying to get all the drums and bass and guitars, including guitar solos, live in one pass. We recorded five or six different passes of the same song. Then Eric Valentine [producer] had some room to play with it and if there was anything glaring from one take, he could kind of find an alternate take.”

Kerns has nothing but praise for Valentine, who produced Slash’s previous CD which featured the guitar god playing alongside such top-notch vocalists as Chris Cornell, Lemmy and Kennedy. “He’s a very, very talented man,” Kerns reaffirms. “We went through an entire phase where the three of us – myself, Brent and Slash – were sitting around arranging and rearranging and tearing songs apart and putting them back together. Then Myles came in and we started that whole process again cause he’s sort of putting in his two cents and then Eric comes in and we start doing that process again (laughs) … But it all came together really fantastic; like it’s huge and aggressive and it’s multi-colored at the same time. It’s not sort of one vein or one flavor; it’s sort of an array, a rainbow of rock (laughs)”.

Having covered the Slash tour on several stops across the country, talking with fans along the way, there was one thing that I heard repeatedly: that they would love to see THIS band record an album. Well, their wish has come true as the band continues to lay down tracks for an anticipated April or May release. I asked Kerns if there was a song that was so good it gave him chills while they were creating it: “There is actually a few like that but there is one in particular that we kind of worked and worked and pulled it apart and rearranged it and took this section out and took that out and it was one of the first things we ever brought in,” he said excitedly.

“The funny thing is, the main riff that Slash was playing on that song is no longer a part of the song, which is totally bizarre cause it was the kind of riff that made you go, damn that’s great … but that particular song was written and rewritten so many times that we’d take a stab at it and the three of us – just Slash, myself and Brent – would stab at it and we’d come up with something and feel good about it and then Myles came in and, well, it doesn’t work on top of that so let’s change that and we kind of juggled it around,” explains Kerns. “Then Eric came in (laughs). Just before we started recording, we were still kind of dealing with that song, to the point that it was almost abandoned. Then it sort of ended up being possibly the strongest song on the record in a lot of ways”.

Although he wouldn’t reveal the title of that song, he did admit that many of the tunes were still in coded names, waiting for Kennedy to put the lyrics into place. When I talked with him for my column in September, Kennedy admitted to sometimes overthinking about the worthiness of what he writes. “He’s incredibly hard on himself,” agreed Kerns. “We’ve had this conversation a few times where he’ll sort of bounce something off me and I go, ‘It’s great’ and he’ll go ‘Well, I’ve been doing this and I’ve been doing that’. And it sort of changes and he’ll come back around to the very first thing he came up with”.

Continued Kerns, “He’s a very talented guy. He sort of cordons himself off in the green room in the studio and is hiding up there by himself, scribbling and writing, and he’s like ‘I didn’t sleep at all last night cause I was up all night writing lyrics’. And I’m like, ‘You’re still writing lyrics? I thought you were done’ (laughs) But that attention to detail is probably why he’s so successful”.

Slash is also very involved with the recording of his new CD. Although some may see him as the poster boy for rock & roll’s wild side, this is not 1991 anymore and the monster guitar player is a clean and sober father of two boys. “Slash is one of the most intelligent guys I know,” Kerns told me when I asked what Slash was really like. “I don’t think people think he’s not smart but I think they have this kind of image of him as this sort of rock & roll, smoking, drugs, rock & roll guy, like he’s some sort of a rock & roll animal. I think that’s the impression people have of him and that is somewhat true, although all those things I just mentioned he doesn’t do anymore. I’m always kind of terrified that I’m spoiling his image somehow by saying that he’s a very thoughtful guy."

But how is Slash in the studio? Is he very vocal about how he wants things or is he more on the quiet side, contentedly playing his guitar? Kerns explained that he was actually a little of both. “A lot of what Slash is all about is he just wants to play guitar. When you know Slash, it’s weird to see him WITHOUT a guitar in his hands. You see him all day long sitting somewhere with a guitar in his hands playing and then you see him onstage playing and then you see him later on playing guitar sitting in the bus (laughs). In the studio, it’s a lot more focus and a command to making it the best it can be and he’s absolutely tireless. We all kind of joke how like we’re all getting hungry or have to go pee and he’s still going, ‘Hey, let’s try this one’. He’s so very focused and very sort of driven. He is a very laid back guy but he also knows what he wants.”

Kerns has called the recording of this CD “magical” and is excited to be a part of it. “Slash has been nothing but awesome to me”, he explains. “He’s been very good to me. I didn’t expect us to have our photos in the live album, Made In Stoke. I didn’t expect us to have our photos in the DVD. I kind of thought, this is Slash’s band, it’s Slash featuring Myles Kennedy; that’s just the way it is. Over the duration of that I’ve watched my own profile get raised a giant percentage. So to me, it’s whatever Slash wants to do. If he decides tomorrow he’s going to get Paul McCartney to play bass, that’s just the way it goes (laughs). Initially, the whole thing about recording an album with Myles didn’t have to be that we’re going to record an album with Myles and Brent and Todd; we’re going to use some session guys in LA and it’s going to be Myles and Slash. But he was awesome about it and let us be on the record.”

So while there are still some overdubs and background vocals and Myles’ lead vocals left to lay down, Kerns believes they will be all done in February. And then “we’ll be out in the spring for sure. I haven’t heard anything official but that’s the plan. I’m assuming Europe and all will be the initial thing cause there’s all the festivals in the summertime and then after that, I haven’t heard anything concrete yet. But I know Slash well enough and he said the other day, ‘I want to be out on the road for at least a year’ and I was like, ‘cool’. I’m sure 2012 will be busy and then probably a chunk of 2013 as well”.

A date in Toronto for March 23 sold out in twenty minutes, proving that the fans are hungry for a new dose of Slash with his stellar band. Get ready, folks, they’re on their way.